Jovi has been an active and creative member of our community for the last couple of years.
She deceased in Parikia, Paros Island, on Saturday 18 December.

Funeral Service will take place on Thursday 23 December at Parikia Cemetery, at 16:00. Photo by Robert van der Most

Follows her CV published on the occasion of a photo exhibition held in 2009 in Apothiki Gallery.

Jovi Starc was born in Hungary and later immigrated with her family to the United States.  Her academic and professional backgrounds reflect her diverse and intense interests in humanity.

She received her degree title, Theoretical Approach to Human Behaviour, accredited through Columbia University (N.Y.), The New School, and Hunter College where she majored in philosophy and minored in screen writing.  She is also an alumnus of the one and only graduating class from the experimental General Arts programme of the University of the New World in Haute-Nendaz, Switzerland, with professors the likes of William Burroughs.

Her fascination for world creation myths blossomed when she participated in a gap year programme with a group of anthropologists studying the lives and customs of the Toholabal Mayan Indian tribe in the Yucatan jungle.  She also travelled extensively through Central America photographing volcanic eruptions as the assistant to renowned vulcanologist and award-winning documentary filmmaker Alain Creusot-Eon.

She later created her own company in the field of industrial design and specialised in the development of infection control products and intravenous device systems, Unihold Medical.  Her business activities led her to live alternately in London, Paris, Amsterdam, Bern, and New York.  Finally however her exploratory and creative impulses drew her back to her original calling, the study of humanity.

She travelled overland photographing the landscape and people of Iran and Afghanistan.  Then spent seven years sailing aboard her boat in Greek territorial waters investigating the origins of Hellenic myths and legends: her writings and extensive collection of photographs to be presented now are the fruit of that odyssey.

She speaks English, Hungarian, Greek, Spanish. She is currently in Greece to continue the three year project in creating the multi-media work titled Oresteia-X". 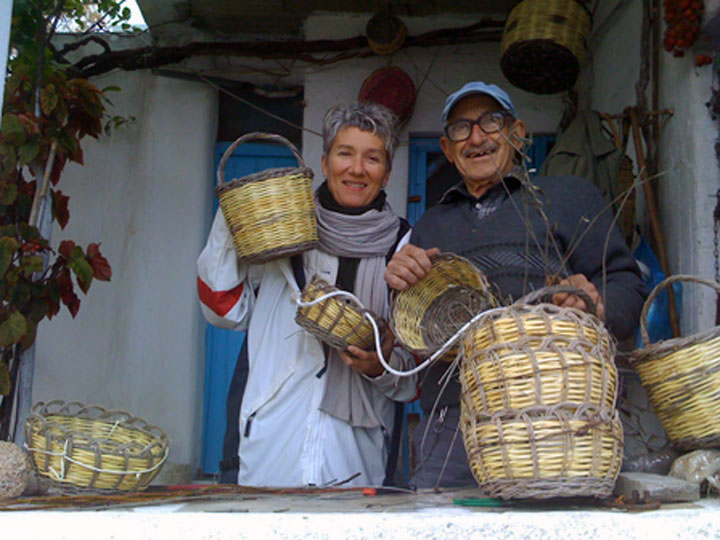 My dear friend Jovi is gone from this earthly plane but she has a permanent place in my heart. Thank you for taking the photos and sharing them here. I will remember her as her happiest self there in Greece in the place and among the people she loved best.  I will miss her vagabonding adventuresome and fearless spirit. May she find peace and a warm homecoming in her final resting place.

Nice photo Monique. Jovi looks happy and reminds us the love she shared with us for Paros.

Thank you for that.