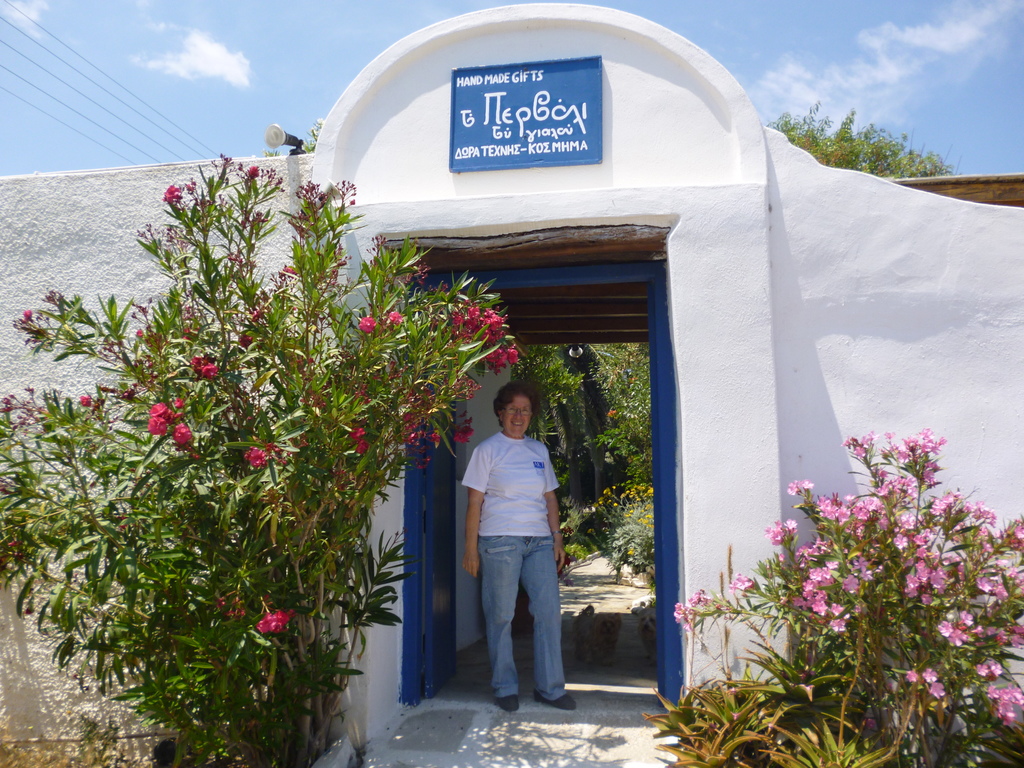 When you visit the tucked away Pervoli Tou Gialou (the garden on the bay) in Drios, you may not only feel you’ve stepped into a secret garden of some other time, some other place, but after meeting Anna Aspropoulou,  if she likes you (and that’s a big must!) you may become friends for life or at least want to return to her charming garden again and again to feel that  peace and harmony that comes with her magical terrain - scattered bungalows amidst a tropical garden and a handicraft shop that invites all the senses, much of it stocked with Anna’s homemade stuff.   Anna is a hidden gem and it took me three years to discover her though we live in the same village!

In her book ‘Gynaikes Tis Parou’ (Women of Paros) 2008, Kyriaki Ragousi-Kondogiorgou selected Anna to illustrate the chapter on’ Women in Tourism’. It’s not difficult to understand why: Anna is not only a astute businesswoman but one with a lot of soul who cares about her island, its tradition, its produce, and the Parian personality and way of life as it once was.

In 1940 when war was declared on Greece, Anna’s father,  Angelos Aspropoulos, together with his wife Marika and first daughter  Kiki, fled from Athens to the relative quiet and safety of Drios on the bay, where he owned some land.  Anna was born in the one-storey building, which now houses the Resalto bar, and which dates back to the 17th century. It was used during the Ottoman empire as the headquarters for tax collection – from Parians as well as citizens from surrounding islands, who sailed into Drios bay, anchored their boats, and walked the few steps up to the facility to pay their dues.  Her father began to build a few bungalows on the land in 1949 to host his friends and relatives, with the building materials sailing into the bay as there was no road from Parikia to Drios at the time. Eventually in 1955 when tourism first started sprouting in Paros, Mr. Aspropoulos started charging rent for the bungalows and that is how Ana was introduced to the tourism business. Luckily for the family, there were repeat  guests and some go back 20 years and/or rent a bungalow all year round, which means Anna hasn’t had to advertise the Pervoli tou Gialou for seasonal one-time visitors, until that is, the crisis hit, and now she is having to do that.  Still she wants to keep it low key, with friends recommending it to other friends.  There is no website, no brochure - visitors must see it to make up their own minds.

You can enter the Pervoli Tou Gialou from the bay of Drios where the fishermen anchor their boats, or from the lovely single cobblestone lane flanked by oleanders that leads to the beach of Drios. Anna will welcome you in her lovely handicraft store which she opened in 1992 and there you will find her delicious homemade jams, biscuits and liquors, such as ‘psimeno raki’ with honey, raisins, prunes, figs, cinnamon and cloves; and a liquor made of sweet black wine and sour cherry. She makes her own jewelry using the ancient Greek technique – with silver, bronze, beads, precious stones as well as those washed up on the beach.  When Ana opened her shop 20 year ago, she organized many happenings as she calls them, the place packed with guests to listen to concerts, island songs, poetry reading (including Efi Panselinou and her son Panselinos).   The local and Athenian press often attended these events and Anna became well known in the newspaper “Eleftherotypia” and the what’s on Athinorama, amongst other publications.

You will probably spend more time at the shop than planned, chatting away with Ana, who gives the impression that you are the most important person in the world and that she has all the time for you.  She has sound advice for all – if they ask for it – having studied psychology as well as the ancient and current philosophers. She also served as a volunteer nurse at the Red Cross Hospital in Athens in the 60’s. “I’m a humanist, I want to help people”.  Her friends in Paros are select people who share a love for nature, the environment, culture, tradition and  animal welfare. One of her good friends is George, a farmer in Tzane who when the tourist boom hit, did not ‘sell out’ and build hotels and rooms on his land like many others did, but continued with animal husbandry and cultivating his farms. He recognized that the tourism business is fickle and now he is perhaps one of the few people in Paros who the crisis has not affected.   Another of her friends is Pandelis Zoumis who though a young man continues to maintain and live off the traditional way of life:  baking his own bread, making his own wine and playing the ‘sandouri’ an ancient island instrument  with roots in Turkey and songs that go back over 100 years . His vineyard and house is open to visitors outside Kostos. Just ask Anna how to get there.

Anna is also a General Secretary of the local branch of the ‘Helliniki Etairia’ – the Hellenic Society for Environment and Culture -which promotes among other things local produce and the exchange of local seeds. The Society has branches across Greece, including Paros (www.ellatparos.gr).

Reflecting on what is happening in Greece today and in particular Paros, Anna believes this is an opportunity for islanders to take back their land, their tradition and restore their character. She thinks tourism has ruined the Parian mode of life arguing half jokingly that many locals instead of promoting their unique tradition, took on the personalities of the tourists.

There is another hidden treasure that Anna can and often makes available to us – and that is the family house in Marpissa. It was built in 1608 by Venetians and its architecture is unique – one-metre thick walls that keep the temperature in the house a pleasant  22 degrees both winter and summer, without ever needing to use ac or heating.  In fact the Society of  Architectural Historians Great Britain visited to write up a study on the landmark’s structure. The house is open to visitors during the Marpissa festival now being held every summer.  But Anna or Kiki may take you there on an individual tour to see the rooms with the original furniture and tell you all about their family tree, with branches in Lefkes and Marpissa.

With her great love of animals, apart from her 2 beloved Yorkshire terriers, Anna tends to a large stray cat community that makes do in the summer but depends on her in the winter months. Every day at 7 am you will find her walking with some 30 cats in tow to the abandoned building on the Drios parking lot where they are fed once a day.  Working with PAWS, she says it’s a great way of taming the cats and catching them for neutering.  If you want to help the neighbourhood cats, she welcomes donations in the PAWs collection box in her shop.