An underwater memorial to Jacques-Yves Cousteau in Kamari, Santorini 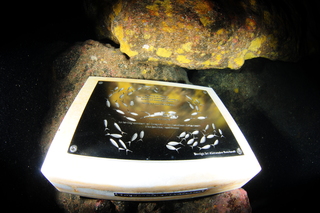 I accompanied Pierre-Yves Cousteau to Santorini on 19 August, where a Zodiac with a 150 HP engine owned by the diving centre was waiting for us. It was very windy (8 beaufort) when we left from Kamari, in the very south of Santorini, where Pierre-Yves knew that we would find some beautiful caves in the bottom of the sea, in this area protected from the wind.

We were 5 on board: Pierre-Yves, Yannis Karpondinis, Pierre-Yves’ childhood friend, the amazing Swedish diver and skipper of the zodiac, and myself.

The zodiac was speeding against the stormy sea and the waves, every time we where facing a wave the Zodiac was flying over it. Because of the very professional Swedish skipper I was not even worried for a second; it was a fantastic one life experience! The moment we arrived to the nice spot, Pierre Yves and I dived for about 30 to 45 minutes, until we choose the beautiful cave where the plaque was going to be mounted. Sailing back to Kamari was again an adventure!

The next day, we had again the same experience with the wind! Finally Pierre-Yves Cousteau, I, the Swedish diver and some friends started the “operation Cousteau”! When the plaque reached the bottom, we dived into the cave with the Swedish diver carrying the plaque under the water like a Viking! Then the 3 of us fixed the plaque on a beautiful spot in the cave. When it was done, I opened a bottle of Champaign and Pierre-Yves, the Swedish diver and I had a toast, around the plaque. Pierre-Yves was caressing the plaque for 2-3 minutes; I believe this was the most emotional part of the expedition with a very happy end. We placed the plaque exactly at 11:30 AM on the 20/08/2011! Then we went back to Kamari where Pierre-Yves  inaugurated the 3rd “Cousteau Divers” centre in the world, based on the principle that the duty of all divers is to dedicate themselves to the environment of the sea, to give our children and the next generations happiness and hope by recovering the fish stock .