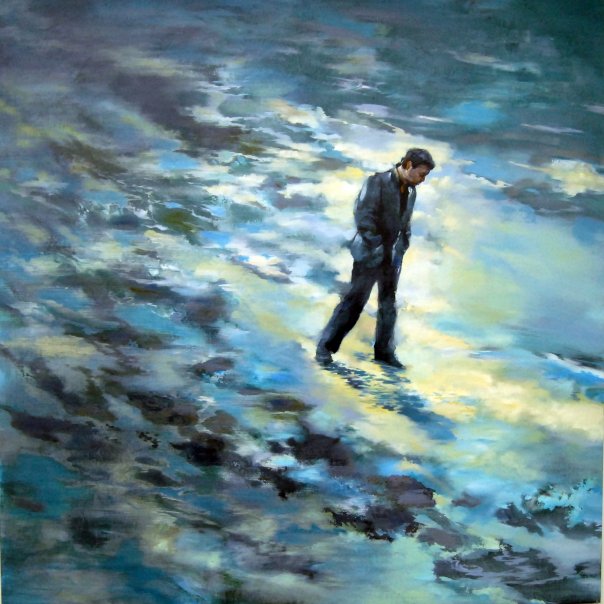 Bio: Chrys Roboras,1972 born and raised in Sydney Australia.Completed secondary education at
Davidson High School, Sydney in 1990 and a Certificate in Fine Arts at the Seaforth Tafe College,
Sydney in 1992. Has also just completed her BA in Fine Arts and Technology with First Class Honours, 2008.(AKTO College, Part of Middlesex University, UK)

Work is based on following concept.

In Australia, I am Greek, In Greece I am Australian. For most of my life, I have known two countries.
However, I spent the majority of it in Australia. Born and raised in Australia by immigrant parents, I could not
help to have the feeling of not belonging embedded in my subconscious. It may have been my father's words
that “one day we would return to Greece”, to his country, his fatherland that evoked feelings of displacement.
Feelings that the place that I was already living in, the environment that I was being raised in and the
landscape that surrounded me was not the right place. This eliminated the environment from my mind, made
me feel very small against the enormous landscapes and direct environment that surrounded me. This
emotion is something that I carried and carry with me for a very long time and now represent in this body of
paintings. I believe that it is very important to understand that we are indeed very small against our
surrounding landscapes. It is also important to be able to recognize the natural need of a human being to find
a place to belong to, a place where there is no emotion of "no man's land".

In my concept I am using the term "no man's land" as a metaphor portraying my figures in search of land, a
place to belong to, they are nomadic people. My nomads are unsettled and alone searching for an identity of
belonging. They wander through various landscapes, contemplating, searching and are detached from their
surrounding environments.

My landscapes are an idea rather than a location. You will not find them wandering the mountains or the sea
or even the city. They are a combination of photos from various landscapes from around my environment
and have been fused together to form a landscape that my figures can contemplate in. Trying to fit in and be
part of the crowd, something usually simple, but in the end strenuous and tiring. This body of work is
dedicated to those who have been or have felt perhaps in No Man’s Land.

Comment by Eleni Grammatikaki on April 22, 2009 at 18:36
welcome to Paros Community! The exhibition seems very interesting. Keep up the good job!