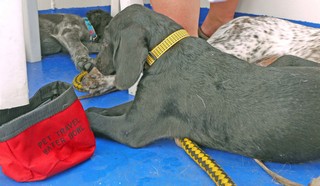 I have for a long time admired the commitment Barbara Burki, her family, and Biggie have for ensuring the strays of Paros achieve a better life. It now amazes me how they find the energy, patience and the willpower to continue day in day out with the task they have taken on board.
On Tuesday evening as my wife and I were getting ready to leave for dinner, we received a call from Barbara. Seven dogs were due to travel with Biggie to Germany on the Wednesday and nobody was available to assist her in getting to Santorini. Could we help ? Chris said we would call Barbara first thing on Wednesday and off we went for Dinner.

Sat outside Tao’s I watched the ferries pass, (I hate ferries) I knew I had a boatload of work to do for back home and could think of any amount of reasons why I didn’t want to go. Anyway we got home reasonably early so I got up at 4am and managed to clear good deal of work thanks to the good old internet. We called Barbara at 8 am and I agreed to go. I knew Barbara had a particularly difficult few days ahead of her and the last thing she needed was to kick it off with a trip to Santorini. So, 11.30am on Wednesday I met Biggie and Barbara on the port along with our seven fellow travellers. The car was jam packed, immediately there was an issue, We couldn’t get the car on the boat near to good ventilation. Barbara dashed backwards and forwards to try and make it happen but couldn’t. She eventually managed to agree with a Blue Star loader that we could take off the car at Naxos, and park nearer the ventilation for the subsequent 2 hour journey to Santorini . Clearly Biggie and I could not cope with 7 dogs on a packed Blue Star. Two would have to stay in the car. At Naxos Biggie took charge of all five dogs and I went to move the car, I really should learn Greek. They think the English are crazy. I mean we are going to Santorini, yet want to get off at Naxos – then get back on …###! Anyhow we managed to achieve this, The dogs in the car had plenty of water and we settled back for the remaining trip to Santorini. It was well into the thirties, Sweat was pouring off us, and we were huddled in a corner of the Blue Star with five dogs. Amazingly these little souls settled down to sleep, No doubt dreaming of a better life ahead than they had previously experienced. At Santorini things were more difficult. We had got the five dogs up in the lift thanks to a helpful member of the Blue Star staff. Getting them back down through the crowd of departing passengers, then into their boxes quickly would prove difficult. Biggie took a puppy in each arm, I took a puppy and two dogs on leads – ever tried it ? Getting off the Blue Star with three frightened dogs ! I tried to follow Biggie but the two dogs on the leads were too frightened to go down the stairs. They dug their heals in at the top step. We were right by the lift and I managed to get a hold of a member of staff and asked if we may use the lift. My Greek as I say is non existent, but I got the gist of what he said. Dogs go down the stairs, and he proceeded to push the dogs off the top step with his foot. Luckily I could only verbally attack the guy, as I had a puppy in my hands and two leads to hold. Otherwise he may have found himself down the stairs - and me in the hands of the Port Police. Anyway, after a couple of minutes Biggie returned to the rescue, and took some off my hands. Another International Incident avoided……!

We eventually arrived at Santorini airport, A shuttle service saw the dogs unloaded, stretch their legs and get some water in preparation for their next ordeal – flying. It never ceases to amaze me how durable these little dogs are. We found a shady corner and awaited the arrival of Barbaras friend Majda Anderson who is Santorini based , She was to assist Biggie with checking in, as some of the dogs left on a later plane with accompanying passengers who would arrive after Biggie checked in. I could see that Biggie was concerned that everything would go to plan, Majda's arrival ensured the experience was on hand to see it through and I eventually left the airport heading back for the ferry ( oh how I hate those ferries) for a SEVEN hour trip back to Paros courtesay of G an A ferries. Indeed Biggie would arrive back in Germany before I got home. 3am Thursday morning I showered and a full 23 hours and 17 minutes after getting out of bed – got back in…

On reflection this was no well oiled military style operation, It was damned hard work, Improvisation, and trust that people along the way, would turn up and do what they could. There simply aren't enough willing hands.

Just how Barbara and Biggie can be expected to Collect strays, Nurse and Care for them, and carry out these transfers amazes me. It should not happen. The stress and work involved will eventually make one of them ill , then who would take over….. They do need volunteers… If you can help please do so….. If you are still not convinced – TAKE A DOG TRANSFER…! (but don’t get up at 4 am first !)

Comment by Barbara Buerki on July 13, 2009 at 18:45
Dave, I so enjoyed reading your text. I could tell many such stories! Thank you so very much for helping us.

Comment by Blondie Vucich on July 11, 2009 at 6:43
Dave, Thank you for your help and your heartfelt account of what really goes on with Barbara and Biggie behind the scenes......I think most of us cannot even imagine. As a volunteer, you have set a strong precedent. Something must change for these women and all the animals they serve. It is time the municipality steps up and assumes some responsibility and the rest of us stand behind the small group working for animal welfare on Paros.