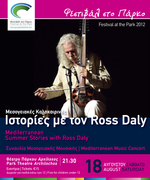 Many years before what we call "World Music" appeared on the global music scene; certain individuals had already understood the enormous value and vast variety of the world's various musical traditions and had dedicated their lives to their study. One such person is Ross Daly.

Ross Daly’s musical odyssey is his life journey. Ross was born in England to Irish parents. At a very early age Ross discovered that music was, in his own words, "the language of my dialogue with that which I perceive to be sacred". His first musical instrument is the cello. At 12 he begins studying the guitar in Japan and at the end of the 1960’s Ross is in San Francisco.

Ross Daly plays many traditional musical instruments, among them the Cretan lyre, the oud and the tambour. His musical compositions are a colorful tapestry which reflect his travels, his life experiences and the many different musical sounds and traditions that he has encountered along his extraordinary way.

It seems though that Ross finally found his Ithaca and for the past 35 years has made the island of Crete his home.

The concert is presented to you by the Paros Park